While some of our clients want to produce their own taylor-made games, they’re not always familiar with the actual costs of producing a game from scratch. Depending on the client needs it could be faster and cheaper reSkinning an existing game. END_OF_DOCUMENT_TOKEN_TO_BE_REPLACED We are currently editing the last levels and giving the final polishing. Definitely our best work to date. It represents the beginning of something great.

At this stage we are considering the possibility of financing our next game through crowdfunding. Finally we feel confident enough developing games and want to explore new concepts at a higher degree of artistic freedom which wouldn’t be possible when working for clients. These days is very difficult to get the attention and involvement of players but our Scary Lilly seduced them. Lilly motivates us to improve MMO’s concept and make it more appealing and entertaining.

Since the game concept and the code is almost the same as MMO-1, all the merit belong to the artists. They really did an amazing job.

We are not millionaire yet but one of our games has made it to the top. It’s been played one million times.

The average play time for this game is 10 minutes. If we do some calculations we’ll see that altogether we have contributed to mankind with 19 years of accumulated make up fun. That’s amazing!

Don’t believe me? Check out the stats:

We’ve been working over the past weeks on a contract involving a serie of make up games. Our expectations were high because these games implement a more realistic approach.

The release of the first game couldn’t be more disappointing. It got a bad rating. So many hours trying to improve the genre and our customer told us that players complained about this new way of applying make up…

After a long sesion of masochism reading all negative comments we came to the conclusion that there was nothing wrong with our game. Basically, players were expecting the usual make up game and nobody told them that this worked differently. We needed to communicate that our games were innovative in an attractive way.

How about choosing a good brand to differentiate them?

“TRUE MAKE UP GAMES” speaks for itself. Besides that, we could produce some animations showing that make up can be directely applied. We synthetised all this in a strong and visually elegant intro. That was not enough, this time we wanted to play rough. What if we use the magic word “NEW” inside an animated star. All those years buying on impulse nonsense at discount stores were not in vain.

The result? Players gave our second game a great rating to . We improved the game without all that expensive programming, additional graphics or modifying the game mechanics. We just changed the perception of the player.

Designing games is all about creating an experience for the players, and that’s for TRUE.

We are very glad to announce that we are collaborating with BoomBang, a great virtual world for the youngsters. Currently, we are developing a frantic new game for them. 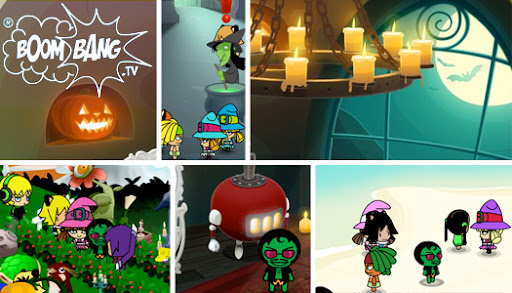 BoomBang is a virtual world with over seven years of history, so it’s kind of a veteran on its industry. During this time, kids around the world have made lots of friends and enjoyed all the events that BoomBang’s staff has held. Kids can chat around, pimp up their islands, fill with crazy furniture their houses, play games with exclusive rewards, and take part in thematical events where you can exchange hearts, snowballs, or easter eggs for secret tokens in hidden and bizarre places. All in all, it’s a very cool and entertaining place for kids, as you can see.

For us it’s a great chance to develop for them. Just give us some weeks and you’ll be able to play the wonderful game we are working on right now. We’ll keep you informed!