This year has been very intense. We’ve produced a lot of games and have a couple waiting in the pipeline.
Hopefully 2013 will bring more projects and stability to our little studio.
Our best wishes for 2013 for the players of our games, our clients, our collaborators and our patient families.
https://www.ravalmatic.com/wp-content/uploads/2012/12/ravalmatic-feliz-navidad.jpg 512 512 Javi Sanz https://www.ravalmatic.com/wp-content/uploads/2016/08/ravalmatic_logo.png Javi Sanz2012-12-20 20:16:002016-10-10 18:05:01Merry Christmas and Happy New Year

The gamescom is the biggest videogame event in Europe and it attracts more than 275.000 visitors.

It’s been a while since we’ve attended an industry event. It was in december last year in Valencia. Now is time to clean the dust of our magic carpet and make it ready to fly to Germany. In August we’ll go to the gamescom to meet some of the companies we work with and pick fresh ideas for new projects.

I hope we don’t get in trouble with the german authorities and end chained in a dark dungeon for having commited this. 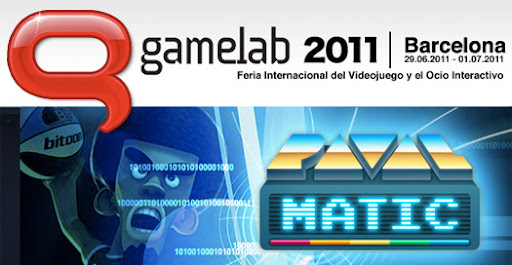 Once again, our city holds a new event on gaming: Gamelab 2011. I guess you could say that we’re lucky guys…

So seek us there and try to catch us like an elusive Pokemon. We may not know how to do Vine Whip attack, but we wash dishes like hell, so we’re much more profitable as slaves than a mere Bulbasaur.

This friday we’ll be attending DevUp, an event held in Barcelona for Iphone Developers and organized by the people of Ideateca.

We’ve heard a lot of good things about these guys. The issues covered in the agenda seem very interesting and this will be a great chance to get a glimpse on how do they work.

Will you be attending too?